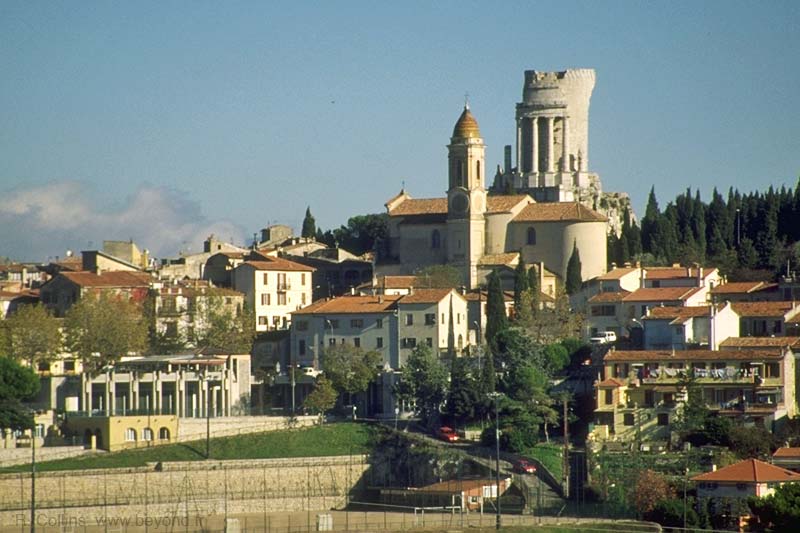 Gallery of 20 photos for La Turbie

La Turbie is a picturesque Medieval village perched on the cliffs overlooking Monaco and the Mediterranean sea. A lovely little village in its own right, La Turbie host the Roman Trophy of Augustus, a monument for the Roman roads Via Julia and the Aurelian Way between Rome and Roman Gaul. The village of La Turbie is on the busy road junction of the Moyenne Corniche where you turn to go down to Monaco. 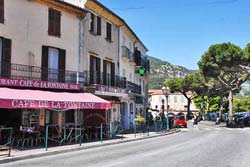 The central part of the village, along the busy Moyenne Corniche highway, has shops, restaurants and hotels, a handy place for a rest, if you can find a place to park during the summer season. Although La Turbie has a healthy content of tourists, it's really an active French village. The lower parking lot is often filled with with parents dropping off or picking up the kids from the centrally located school, and the Mairie, just above, is promenent in it's Provençal pastel. 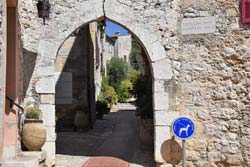 The old village, rising up the hillside towards the trophée, is well restored, with the original medieval portes, including the one where the ancient voie Romaine entered, carved lintels over doorways, ancient houses and narrow streets paved with stone and brick. 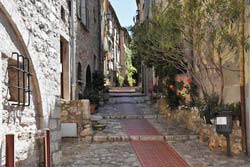 The narrowness of the streets and the height of the buildings does tend to keep the village in shadow most of the day. Wandering through here, you'll also discover 12th and 13th-century defensive walls, picturesque arched passages and lovely plants and flowers just about everywhere. 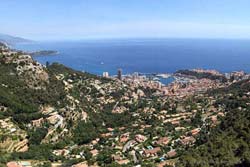 From La Turbie village you have a magnificient view of the Mediterranean coast, from Monaco just below, and out to the northeast past Roquebrune-Cap-Martin to Italy. The lookout point is at the far end of the parking lot at Place de la Crémaillère, by the Center of the National Monuments. 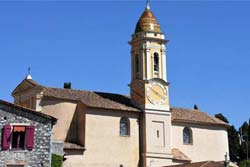 The lovely 18th-century Saint-Michel church in La Turbie was built in 1764-1777, in a style called baroque-niçois. It has a beautiful Provencal-pastel exterior and capped with a colored fish-scale tiled dome. The original village church was a small Romanesque affair located at the site of the current cemetery. It became difficult to access when the village was fortified in the 18th century, so the "new" St-Michel church was built. Construction material included stones from the ruins of the Trophy of Augustus.

The Trophée des Alpes, or Trophy of Augustus, is a Roman site with a tall tower in a park setting and an ajacent museum. Visiting the site and museum has an entry fee of 6 euros (2018)/

First record, Roman era, by Ptolémée: Tropaia Sebastou; 1078 La Turbie; in 1774 it was spoken of as castro de Torbia, and later as Turris Viaea (the tower on the road).

Celto-Ligurian: This was a strategic location even in prehistory, and signs of pre-Roman habitation has been discovered, especially near the Chapelle St-Pierre.

Gallo-Roman: La Turbie was the Roman's coastal gateway between Transalpine Gaul (Provence) and Italy, and the highest point on the Via Julia Augusta, called the Summa Alpe (the Alpine summit). Started in 13 BC, the coasta Via Julia was the most direct road between Italy and Gaul, and this ridge of Mont Agel was an ideal site for the monumental Tropaeum to Augustus. This southern route was extended during the reign of Aurelius (161-180) as the Via aurelius.

Medieval: Genoaese came to Monaco in 1215, beginning a constant fight between Genoa and Monaco over the territory. Queen Jeanne gave La Turbie to the lords or Monaco in 1399, and in 1419 Savoy returned it to Genoa, and they occupied the Fortress in 1507. Monaco got control again, and maintained it until 1713. In 1860, The Comté de Nice and Savoy, along with La Turbie, were reattached to France. IN 1904 and 1908, the Beausoleil and Cap-d'Ail were detatched from La Turbie and established as independent communes.

This village perched above Monte-Carlo isn't in an ideal area for casual hiking, but it does have a section of the GR51 passing directly through the village. The eastern end of the GR51 Balcony of the Cote d'Azur begins at the Italian border (about 20 trail km away) and passes along the ridge at the Col de Guerre (555 m), just above the autoroute above La Turbie. The GR51B is a branch of La Balcone the climbs from the center of Monte-Carlo and passes through La Turbie to join the main GR51 at the Col de Guerre.

A good rock climbing area is located at La Turbie. The club Grimp'Azur in Nice has complete information, including a diagram of all climbing routes, on their web site.

After 25 years online, my one-man web ProvenceBeyond has gone completely ad-free — I would appreciate your support.