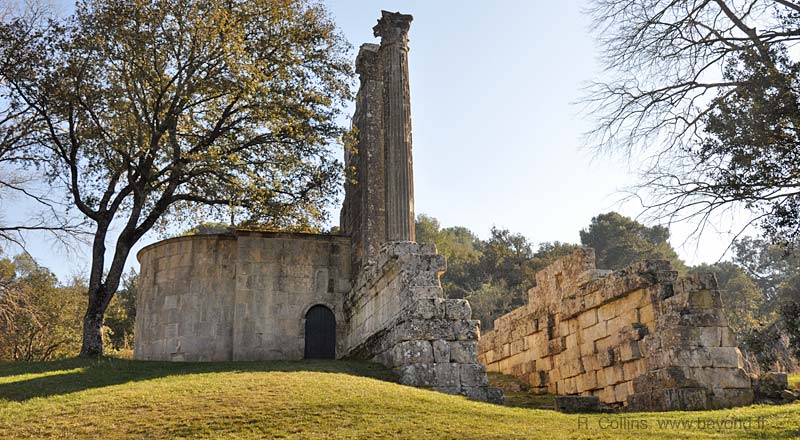 The remains of the 1st-century BC Roman Temple of Chateau-Bas sit peacefully in the woods east-southeast of Vernègues, on the grounds of the Château-Bas. The temple still has a tall Corinthian column, and the stone Medieval Saint-Cézaire chapel is intact against the temple's east wall. 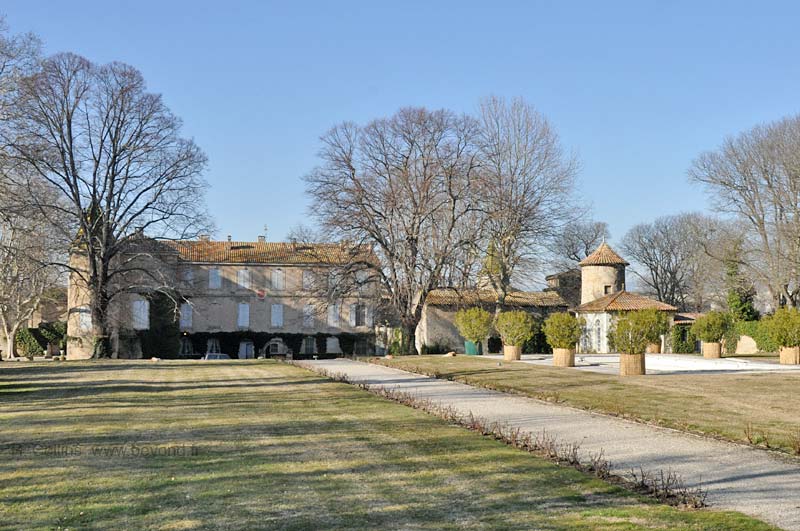 The temple and chapel stand in an open woods setting, with thick beech woods off to one side and low scrub oak on the hills behind. Stretching out to the north, in front of the low hill is the Château-Bas and surrounding farmlands, with the hilltop ruins of old Vernègues village to the northwest.

The temple sits beside the private grounds of the Château-Bas, so you can't drive in. Access is via a yellow-marked trail from the road about 500 m to the west.

The high-speed TGV train passes by only a few hundred meters from the temple site, passing over a long viaduct before disappearing into tunnel almost beside the ruins. We watched a few go by, and they make more of a distant woosh than a roar.

Called the Roman Temple of Château-Bas, the ruins were first recorded in the 18th century by Abbé Couture. Excavations of the temple and the surrounding area were done by J. Formigé in the early 20th century.

According to James Bromwich, the temple was for worshiping Jupiter, along with Minerva, Neptune and Mercury. He also states that in this rural site, with an abundant local spring, the Gauls probably worshiped here as well. A broken altar found in the vicinity was dedicated to Silvanus, a Roman woodland god, the embodiment of the fertility of nature in Gallic Provence.

The vernegues.com website calls this the Temple of Diane, but doesn't mention a source.

This 11th-century chapel is built of fitted stone, standing against and partially using the eastern wall of the Roman temple. The chapel was consecrated in 1054.

A yellow-marked petite-randonée hiking trail passes by the front of the temple, along the back wall of the Château-Bas. To the north, the sign indicates:
- 40 minutes to the Chapelle Saint-Symphorien, 1 km (due) north, on the east side of the TGV viaduct;
- 50 minutes to a juction with the GR6 Hiking Trail (just north of Vernègues village;
- 70 minutes to Alleins.