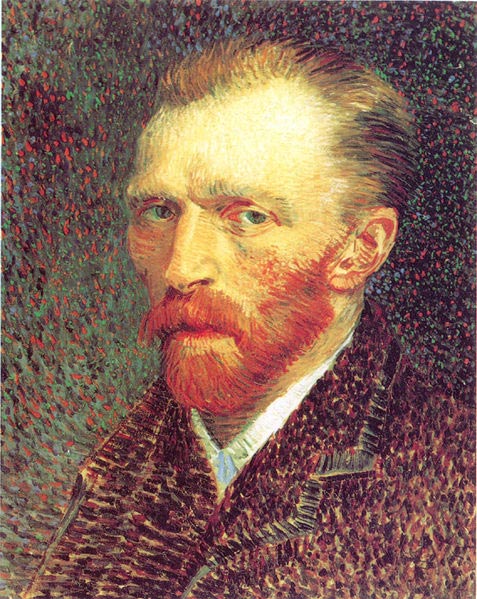 The purpose of Beyond's Van Gogh page is to relate the times and places where he lived and worked in France and Provence; it is not intended to be an in-depth site about his life or his work. The web is full of sites about Vincent Van Gogh. Some that we found quite good are listed at the end of the page (Sources).

In Paris, Vincent painted the cafés and boulevards and the open countryside along the Seine River, a total of over 200 paintings during the two years. Here, he also painted at least 20 self-portraits. Some of the artist's Parisien hangouts included Julien "Père" Tanguy's paint shop, where Paul Cézanne's work was displayed.

It was in Paris that he met Paul Gauguin, Camille Pissarro and Toulouse-Lautrec. During his Paris years, Vincent also got to know the younger "artists of the Petit Boulevard": Emile Bernard, and Louis Anquetin, as well as John Peter Russell.

While living in Paris, Vincent began visiting Asnières-sur-Seine in the Spring of 1887, along with other Impressionists of the day. Here he became aquanted with Paul Signac.

In November 1887, Theo and Vincent met and befriended Paul Gauguin, who had just arrived in Paris.

Vincent left Paris for the South of France in early 1888.

The following details are from wikipedia.org, with some changes.

Van Gogh arrived at the Arles railway station on 21 February, 1888, crossed Place Lamartine and entered the city through the Porte de la Cavalerie. He took quarters a few steps further, at the Hôtel-Restaurant Carrel, 30 Rue Cavalerie. His companion for two months was the Danish artist, Christian Mourier-Petersen.

In March, he painted local landscapes, using a gridded "perspective frame." Three of his pictures were shown at the annual exhibition of the Société des Artistes Indépendants. In April he was visited by the American painter, Dodge MacKnight, who was resident in Fontvieille, a few km to the northwest.

On 1 May, he signed a lease for 15 francs a month to rent the four rooms in the right hand side of the "Yellow House" (so called because its outside walls were yellow) at No. 2 Place Lamartine. The house was unfurnished and had been uninhabited for some time so he was not able to move in straight away. He had been staying at the Hôtel Restaurant Carrel in the Rue de la Cavalerie, just inside the medieval gate to the city, with the old Roman Arena in view. The rate charged by the hotel was 5 francs a week, which Van Gogh regarded as excessive. He disputed the price, and took the case to the local arbitrator who awarded him a twelve franc reduction on his total bill (the weekly rate being reduced from five francs to four). On May 7 he moved out of the Hôtel Carrel, and moved into the Café de la Gare. He became friends with the proprietors, Joseph and Marie Ginoux. Although the Yellow House had to be furnished before he could fully move in, Van Gogh was able to use it as a studio. His major project at this time was a series of paintings intended to form the décoration for the Yellow House.

In June Vincent visited Saintes-Maries-de-la-Mer. He gave drawing lessons to a Zouave second lieutenant, Paul-Eugène Milliet, who also became a companion. MacKnight introduced him to Eugène Boch, a Belgian painter, who stayed at times in Fontvieille (they exchanged visits in July). Gauguin agreed to join him in Arles. In August he painted sunflowers; Boch visited again.

On 8 September, upon advice from his friend the station's postal supervisor Joseph Roulin, he bought two beds, and he finally spent the first night in the still sparsely furnished Yellow House on 17 September.

On 23 October Gauguin eventually arrived in Arles, after repeated requests from Van Gogh. During November they painted together. Uncharacteristically, Van Gogh painted some pictures from memory, deferring to Gauguin's ideas in this. Their first joint outdoor painting exercise was conducted at the picturesque Alyscamps. It was in November that Van Gogh painted The Red Vineyard.

In December the two artists visited Montpellier and viewed works by Courbet and Delacroix in the Musée Fabre. However, their relationship was deteriorating badly. They quarrelled fiercely about art. Van Gogh felt an increasing fear that Gauguin was going to desert him, and what he described as a situation of "excessive tension" reached a crisis point on 23 December 1888, when Van Gogh stalked Gauguin with a razor and then cut off the lower part of his own left ear, which he wrapped in newspaper and gave to a prostitute named Rachel in the local brothel, asking her to "keep this object carefully." Gauguin left Arles and did not see Van Gogh again. Van Gogh was hospitalised and in a critical state for a few days. He was immediately visited by Theo (whom Gauguin had notified), as well as Madame Ginoux and frequently by Roulin.

In January 1889 Van Gogh returned to the "Yellow House", but spent the following month between hospital and home, suffering from hallucinations and paranoia that he was being poisoned. In March the police closed his house, after a petition by thirty townspeople, who called him fou roux ("the redheaded madman"). Signac visited him in hospital and Van Gogh was allowed home in his company. In April he moved into rooms owned by Dr. Rey, after floods damaged paintings in his own home.

Released from the Arles hospital, Vincent voluntarily entered the Saint-Paul-de-Mausole asylum at Saint Remy-de-Provence, where he stayed for a year. While in Arles and Saint-Rémy, Vincent paints a series of masterpieces, including Cypresses, Irises and The Starry Night.

The Office de Tourisme in Saint Rémy-de-Provence has a "Circuit Van Gogh": a walking route visiting the sites of 21 of Van Gogh's paintings. At each of the sites you can see an information panel of the painting and view the same view Vincent would see today. The "circuit" includes the old center of Saint Rémy and the Saint-Paul-de-Mausole asylum/monastery - a 20-minute walk from the center.

In May 1890, Van Gogh moved to Auvers-sur-Oise, near paris. While in Auvers, Vincent painted portraits of his new acquaintances, including his Doctor Paul Gachet ("Dr. Gachet"). He painted the landscapes of that area, including the garden of the painter Daubigny,and the nearby wheatfields ("Crows in the Wheatfields").

on 27 July 1890, Vincent Van Gogh walked into his Wheatfield of the Crows and shot himself. He died two days later.

www.expo-vangogh.com/2.cfm (an overview of his life)

www.galenfrysinger.com/van_gogh.htm (images of his paintings and the actual sites)